Raging Thunderstorm on the Colorado River

The fire is raging, and the corn is ready to roast. A crack rings out with a flash of light- the thunder is no longer distant. The rain comes in torrents. Wind is howling, whipping through camp... Whipping our shelter like an old, frayed flag that has become ragged from years of flying high. The wind came out of nowhere! 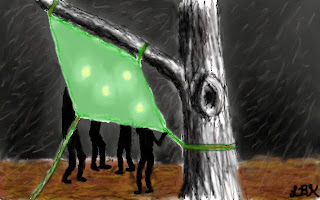 There is a river through our shelter. The fire is out, and mud has covered everything, including the corn we were just about to roast. We hold the shelter down- we are human stakes. Lightning blinds us and the crackle and roar of thunder hits at the same moment. I scream. Then I laugh.

Something unexpected always happens on river trips. Always. I've been around storms. I've canoed through crazy wind. But this storm, swirling all around is and soaking us even through a tarp and our rain coats, is more intense than any I've experienced in my life. Another crack, and again I'm blinded at the same moment of the roar of thunder.

We've found another tarp and I stand with my back to the storm, tarp stuck to my back from the howling wind... This is the only way to keep the driving rain from soaking us.

I laugh. The absurdity of watching all 4 of us stand as human stakes, the only thing that has ensured that our shelter doesn't fly away.

More than 2 inches of rain have fallen in 45 minutes. It seems like longer. Finally, we have a moment between the flash of lightning and the still deafening roar of thunder. Only a moment. And then the rumble moves on into the distance. I no longer feel the tingle of electricity in the air. Finally, my heart stops pounding and I can breathe again. The sky still spits out sprinkles and the distant thunder breaks the silence, but it has passed, and we are safe.
Posted by Following the river at 2:50 PM 2 comments:

The Call of the Wild by Robert Service

I memorized this poem in 2004 while guiding in Alaska.... Every time I wander in the wilderness, whether it's the sagebrush desolation of Colorado or the black and red canyons of Utah or the naked grandeur of Alaska, this poem runs through my head, a silent refrain that responds as I listen to the wild... It's calling me. And I must go. :)

The Call of the Wild
by Robert Service

Have you gazed on naked grandeur
where there’s nothing else to gaze on,
Set pieces and drop-curtain scenes galore,
Big mountains heaved to heaven, which the blinding sunsets blazon,
Black canyons where the rapids rip and roar?
Have you swept the visioned valley
with the green stream streaking through it,
Searched the Vastness for a something you have lost?
Have you strung your soul to silence?
Then for God’s sake go and do it;
Hear the challenge, learn the lesson, pay the cost.

Have you wandered in the wilderness, the sagebrush desolation,
The bunch-grass levels where the cattle graze?
Have you whistled bits of rag-time at the end of all creation,
And learned to know the desert’s little ways?
Have you camped upon the foothills,
have you galloped o'er the ranges,
Have you roamed the arid sun-lands through and through?
Have you chummed up with the mesa?
Do you know its moods and changes?
Then listen to the Wild -- it’s calling you.

Have you known the Great White Silence,
not a snow-gemmed twig aquiver?
(Eternal truths that shame our soothing lies).
Have you broken trail on snowshoes? mushed your huskies up the river,
Dared the unknown, led the way, and clutched the prize?
Have you marked the map’s void spaces, mingled with the mongrel races,
Felt the savage strength of brute in every thew?
And though grim as hell the worst is,
can you round it off with curses?
Then hearken to the Wild -- it’s wanting you.

Have you suffered, starved and triumphed,
groveled down, yet grasped at glory,
Grown bigger in the bigness of the whole?
"Done things" just for the doing, letting babblers tell the story,
Seeing through the nice veneer the naked soul?
Have you seen God in His splendors,
heard the text that nature renders?
(You'll never hear it in the family pew).
The simple things, the true things, the silent men who do things --
Then listen to the Wild -- it’s calling you.

They have cradled you in custom,
they have primed you with their preaching,
They have soaked you in convention through and through;
They have put you in a showcase; you're a credit to their teaching --
But can't you hear the Wild? -- it’s calling you.
Let us probe the silent places, let us seek what luck betide us;
Let us journey to a lonely land I know.
There’s a whisper on the night-wind,
there’s a star agleam to guide us,
And the Wild is calling, calling. . .let us go.
Posted by Following the river at 1:28 AM No comments:

Email ThisBlogThis!Share to TwitterShare to FacebookShare to Pinterest
Labels: poem, poetry, Robert Service, the call of the wild

I have had the joy of watching some beautiful baby Great Horned owls growing up in my neighborhood! I've led 3 meetups so far to bring people to see the owls, and my members have gotten some incredible photos!!! The parent owls have lived in my neighborhood for 4 years, and have used this nest for 2 seasons so far. It has to be the best nesting site I've ever seen!! The owls are completely sheltered from any weather, and they have a great view of all of the people passing by on the trail! They seem to enjoy the attention- at least, that's what I think!! 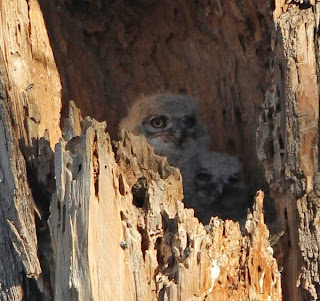 This photo, taken by Sue of my meetup group, is of the babies at 3 weeks old. When I saw them a week before they were tiny little white fluffballs. In only a week, their down has turned gray! 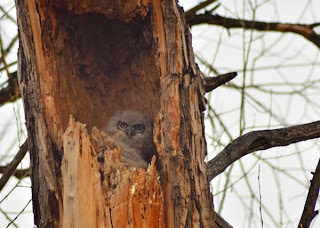 In only a week, the babies have grown substantially! It was a cloudy, rainy day so only 2 people came this time. The babies are very well sheltered, so they didn't care! Luckily, my friend Paul came with his fantastic photography skills and was happy to share his photos with me! Unless otherwise stated, most of the photos on this blog are his photos. 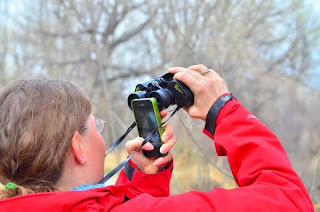 I don't have a fancy camera so I tried to take a photo through my binoculars. It came out pretty darn well!!! 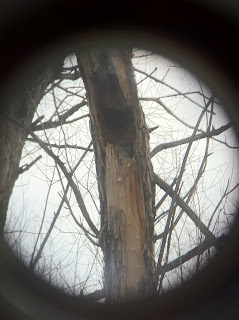 Here's my best photo through the binoculars. 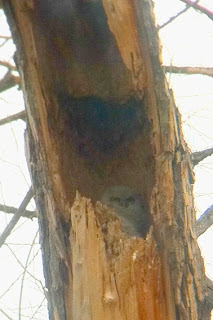 Edited and photoshopped- who needs a fancy camera anyway??? Dad is a bit smaller than the mama owl and he usually sleeps a bit further away from the nest. Great horned owls mate for life and will choose a territory where they live for their entire lives! 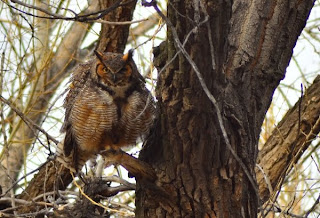 Mama has just awakened in this photo- she's getting ready to fly for the evening! 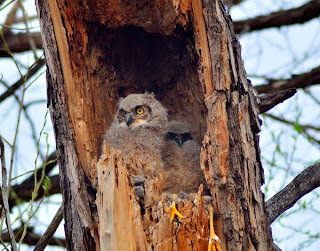 The babies are now 5 weeks old. They are spreading their wings and no longer falling all over each other! Notice the legs hanging out of the nest- apparently the babies had a meal of red tailed hawk! That's what some of the local birders think, at least. 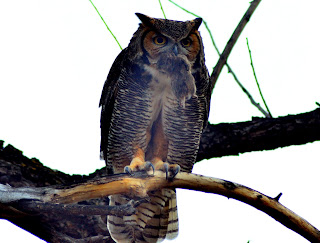 This time, mama decided to go a bit smaller and caught a vole to feed her babies with. 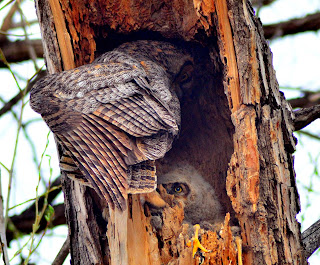 She is giving the vole to the babies here. 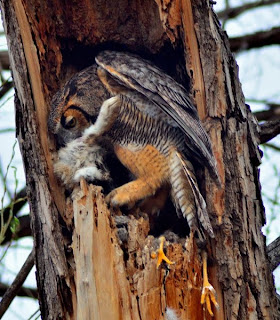 She also caught them a rabbit! 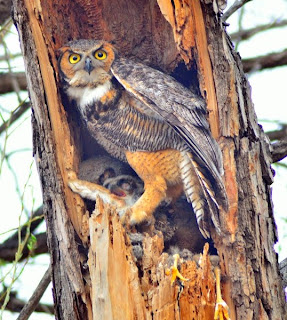 These babies are quite well fed, don't you think? Great horned owls will eat a wide variety of prey: rabbits, birds, fish, raccoons, and even, apparently, red tailed hawks! Their talons are extremely powerful- with them, owls can exert pressure that is 300 pounds per square inch!

If anyone would like to come see the owls, join my meetup, Boulder Naturalist Outings, and sign up! I'll have outings to see them throughout the summer. They will fledge in late May but they'll stick around until at least October.

What a magical experience to see these owls so close to home. It's amazing. What I really love is that the whole neighborhood CARES about these owls. The male disappeared for a couple of weeks and when he came back, people spoke of him like they would an old friend.

This is the first time in my life that I've witnessed an entire community of hundreds of people CARING so deeply about our local wildlife! This is the type of connection I dream about facilitating to my meetup members and to society at large. Imagine what would happen if everyone was so aware of their local landscape and wildlife?

The world would be a different place. When we care deeply about the Earth, we take care of it! When we care so deeply, duality disappears and we become, as they say, "one with the universe"... When we know a place as deeply as we know ourselves and our families, our community expands to include the more-than-human world, and we gain wisdom about our place in the world that informs WHERE WE WANT TO BE and how we can have an impact.

These owls have changed our community for the better, and I love them for it.
Posted by Following the river at 1:18 PM 3 comments:

Keep up with Lauren and The Path!